How Much Do Low Rates Reduce Housing Costs?

That sounds like a simple question. Of course a lower rate means a lower monthly payment. But how much of a difference does that really make. I’ve heard people overly-simplify the issue by saying that a 1% change in rate is roughly the same as a 10% change in price. Let’s look into this a little closer and see if it holds up.


We’ve all heard that interest rates today are at all-time lows. I think we take that for granted, so it helps to include this chart that goes back to 1975. It shows a 36-year average of mortgage rates. The blue line is 30 year fixed rates and since that is the most popular program, that is what we will focus on. As you can see by the graph, mortgage rates in 2010 are truly lower than anything we have seen in our lifetimes. 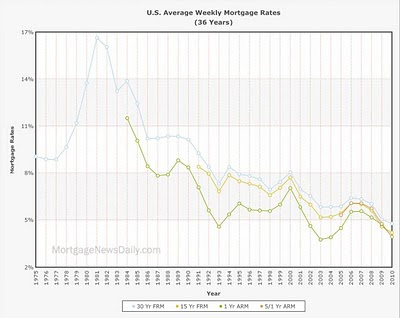 Current average conforming 30 year fixed mortgage rates are around 4.375%. If you were to purchase a home with a $400,000 home loan, the monthly principal and interest payment at that rate would be $1,997.


Don’t think I chose a year with an exceptionally high rate. I could have used 1981 where rates were 16.63%. In fact, the average rate over the 36 years is 9%. I chose 2000 because it wasn’t that far back in history. The lesson here is that we must recognize what an amazing opportunity we have to borrow money at this specific point in history. Years from now we can look at an updated version of this graph and see the low point, and remember what a great deal we got in 2010.
Posted by Chris Mozilo, CMB at 2:49 PM