Know Before You Owe

One of the many facets of the Dodd-Frank Wall Street Reform Act was the creation of the Consumer Financial Protection Bureau (CFPB). The purpose of this new government agency is to protect consumers from predatory practices of banks and other financial institions including mortgage lenders. Elizabeth Warren, the individual appointed by President Obama to get CFPB off the ground, recently announced that they are working on the consolidation and simplification of the disclosures that lenders are currently obligated to use. The project is called "Know Before You Owe."

There are many laws that affect the mortgage disclosures and documents that a borrower must sign, and hopefully understand. The two most significant of these laws are the Truth-in-Lending Act (TILA) and the Real Estate Settlement and Procedures Act (RESPA). TILA and its relevant disclosures are regulated by the Federal Reserve while RESPA and its disclosures are regulated by HUD. CFPB brings the regulation together under one agency, and one of their projects is to combine the disclosures.
You can actually visit the CFPB website to review two prototype disclosures and vote for which one you prefer. The forms would replace the current Truth-in-Lending form as well as the unpopular and confusing Good Faith Estimate that was just updated last year. 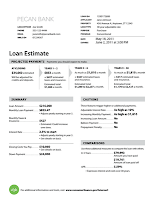 Some in the mortgage industry complain that these forms are too restrictive and stymie loan product innovation. Others argue that loan product innovation created the housing meltdown to begin with. I subscribe to the "guns don't kill people, people kill people" argument when it comes to non-traditional mortgages. Although I recently heard another second amendment argument which was "guns don't kill people, it's those damn bullets." I'm not sure how that statement fits into the mortgage discussion, but I got a chuckle out of it.
Take a look at the two protype forms. Vote on your favorite and give the CFPB your feedback. Give me your comments below.
Posted by Chris Mozilo, CMB at 1:32 PM