America's Future Economic Growth - Not What We've Come to Know

Here is an exert from a daily update I received last night from Jay Goldinger with the Early Warning Wire. It provides incredible insight into our economic future as a country.

The chart below is the most important of the year. It clearly shows the dramatic change in US borrowing from the private to the public sector. The red bars shows the dominance of business borrowing until the beginning of 2008 when it was replaced by the government (blue). While most believe we are at the precipice of inflation as persistent government borrowing forces the private sector to pay more interest for new loans I see it as the start of a new chapter in the US economy. Since we only see the future from our own past experiences most US businesses have spent the last three years stockpiling cash and reducing or ending leverage. Instead of the federal government "crowding out" private sector borrowing these record savers will spend the next decade financing growth slowly and internally through profits and using their cash hoard. Of course growth will be slower and unemployment higher than in any recovery since the 1940's but it will have more traction and not be dependent on access to the credit markets which propelled the real estate market into a crash landing. The government will slowly (very slowly) reduce its debt in the next decade mostly by not having to renew existing debt. It is not what we are used to nor is it our first choice but sometimes life is best enjoyed when we learn to take the path of least resistance (low debt) rather than go back to the route most familiar but fraught with risk. Those that adapt to the new paradigm will profit while those that fear change will see assets dissipate and not understand why. 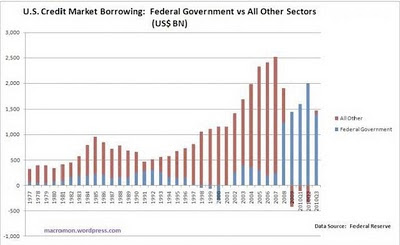 Visit the Early Warning Wire to subscribe to Jay's updates, and to learn about Food on Food, a philanthropic organization to help the homeless in L.A. transition to life off the street.
Posted by Chris Mozilo, CMB at 3:29 PM